Toyota introduced the Etios Liva in 2011 as its base model for the Indian market, and it was the hatchback version for the 2010 Etios sedan.
As a world leader in the automotive industry, Toyota tried to be present in any significant market in the world. The Etios might not have been an expensive car, but it could sell in high numbers. For that, the Japanese carmaker targeted a few specific markets such as India, Brazil, and Pakistan. While the sedan was an important vehicle for families, the hatchback version was more suitable for the younger generations.

The Etios Liva showed the typical Toyota front fascia with a wide V-shaped slatted grille and angular headlights from the front side. An additional air-intake to cool the engine found its way on the lower side of the bumper. Depending on the trim level, the Etios Liva featured fog-lights and light-alloy wheels. Its slightly sculptured door panels and the small roof-spoiler in the back were proof of attention from the automotive giant.

Inside, the carmaker installed a curved dashboard where the instrument cluster took center stage. On the center stack, Toyota installed the audio system and two air-vents. The carmaker placed another set of vents on the sides.

Toyota offered the Etios Liva with a choice of two engines: a 1.2-liter gasoline and a 1.4-liter turbo-diesel. They were both paired to a five-speed manual gearbox. 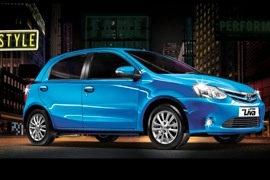