Toyota introduced a completely new Tundra in 2021, after 14 years since the launch of this pickup’s predecessor, in 2007, and the seven since the refreshed 2014 model.
The full-size pickup segment is highly competitive in the U.S. market. So Toyota tried hard to convince American customers to ditch the Silverados, the F-150s, the RAMs, or the other Japanese contender, Nissan Titan. Tundra’s sales results were not bad, but it never gained the same image as the local manufacturers.

Its rugged appearance is backed up by a redesigned chassis and a proven sturdiness. Toyota designed, engineered, and tested the 2021 Tundra in U.S. Gone were its predecessors’ soft lines and curved panels. Instead, the front fascia features a flat, broad grille, which looked more like a barbwire fence, or gate, than a car’s grille.

For the interior, Toyota understood that it couldn’t compete with the same rugged appearance of its predecessors. It offered the Tundra in six trim levels, ranging from SR5 up to the 1794 limited edition. With the 2021 model year, the customers could enjoy a luxurious cabin adorned by leather upholstery and a 14” infotainment screen that sat atop the center stack.

But the most essential change was on the car’s platform. It featured coil springs in the back, ditching the leaf springs. It could still handle 1,950 lbs (884 kg) and tow up to 12,000 lbs (5,443 kg). Under the hood, there was only a twin-turbo V6 powerplant that offered 348 hp for the SR5 version. At the same time, the other options were 389 horses and a hybrid version that provided a combined output of 437 horses and 583 lb-ft (790 Nm) of torque. All versions were paired with a 10-speed automatic transmission and sent the power in all four corners. 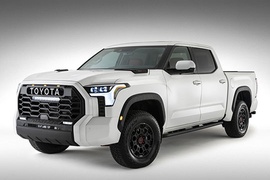