Toyota developed a unique small-segment hatchback for specific countries and used the same Yaris nameplate, even though it wasn’t the same vehicle.
Produced for South-East Asia and South America, the 2013 Yaris XP150 was the kind of vehicle that those customers needed. It was an econobox built responsibly by the big Japanese carmaker. While it lacked in some areas regarding pollution or safety, it gained on the price tag. Moreover, even though it shared its platform with the European and American siblings, it featured a 40 mm (1.6”) longer wheelbase. Toyota built it as a five-door hatchback or a four-door sedan.

While it didn’t have to comply with the strict European emission standards or with the Californian rules, the carmaker considered that it shouldn’t cut the design department’s budget. Thus, the Indian-built Yaris featured a pair of slim, angular headlights with a thinner upper line extended over the front fenders. Its profile revealed a raked windshield followed by a slightly curved top and ended with a tiny spoiler. On the C-pillar, a darkened area created the image of a floating design roof.

Inside, it wasn’t the most spacious car from Toyota’s stable, but it offered better legroom for the rear passengers than its European or American sibling. Its design team made a binocular-style instrument cluster with the speedometer in the middle flanked by a tachometer on the left and the fuel level on the right panel. The carmaker provided an automatic climate control unit and a five-speed automatic transmission depending on the trim level.

Under the hood, Toyota installed a 1.2-liter powerplant paired with a five-speed manual or an automatic (CVT) transmission. 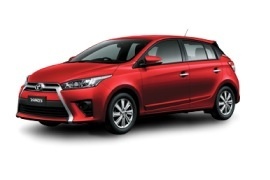