The first Volkswagen Golf GTD was launched in 1982 and the first station-wagon Golf was introduced in 1993.
In 2015, the two elements were combined, forming the first Golf GTD Variant.

At the 2015 Geneva Motor Show, the German car-maker introduced the first station-wagon GTD for the Volkswagen Golf. The new version transformed the Golf into a fast-paced family mover. But it wasn’t just a station-wagon with a more powerful engine. It came with a complete package.

From the outside, the Golf GTD Variant (station-wagon) showed a different front fascia than other siblings. It featured a bigger, wider, opening into the front spoiler. Two additional wide air-intakes were placed on the sides and with the optional LED fog-lights inside. A gray strip ran along the front fascia, at the bottom of the grille and inside the standard bi-Xenon headlights. It was specific to the GTD versions. In the rear, a roof spoiler and a twin-chromed exhaust were installed. The smoked taillights were specific for the GTD station-wagon.

Inside, the front seats were upholstered in classic “Clark”-style GT tartan design. The standard ambient lighting and the “Composition Touch” radio system were fitted as standard. Regarding the trunk-space, the GTD Variant offered 605 liters (21.3 cu-ft) to the windows line and up to 1620 liters (57.2 cu-ft) with the rear seats folded.

The 184 hp engine under the hood was mated to a standard 6-speed manual and a 6-speed auto was offered as an option. To car featured an XDS+, electronic differential lock integrated with the ESP system. 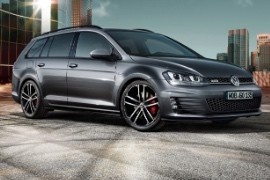