Based on the same MQB platform as the regular, eighth generation, of the Volkswagen Golf, the Variant was the station-wagon version for the well-known German compact car.
Ever since the third generation of the Volkswagen Golf, the German car-maker offered its most known product in a family version, with a bigger trunk area. While most of the credits are usually going for the 5-door or the 3-door versions, the station-wagon was very well sold all over the world.

The eighth generation of the Golf featured a slimmer front fascia, with narrow headlights extended on the upper side with “eyebrows” swept on the fenders. The front bumper featured a wide grill in the apron with horizontal slats that visually made the car looks wider. Up to the A-pillars, the car looked the same as the hatchback, but the longer roof and the back were different. A set of side windows was placed behind the rear door and the raked tailgate completed the car.

Inside, the Golf Variant featured the same dashboard as the regular Golf, with that clean look for the dashboard, uncluttered by too many buttons. The 8.25” touch-screen infotainment display was installed in a floating design trend, on top of the center stack, and close to the instrument cluster. The automatic gearbox selector was placed on the center console, like a mini-joystick.

Under the hood, the Golf Variant featured a mild-hybrid system powered by a turbocharged gasoline engine with direct fuel injection. It was mated to a 7-speed automatic transmission (DSG – dual-clutch). 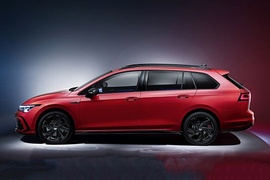