When Volkswagen introduced the ID.4, it showed just a glimpse of what the MEB platform was capable of, and the 2021 ID.4 GTX revealed more of it.

Volkswagen was not the first carmaker to switch to electric power for its vehicles, but it didn’t rush either. At first, the German carmaker adapted some of its well-known products such as the up! and Golf while it was researching a better platform for electric mobility. The ID.3 was a clear sign of what the newly developed MEB platform could do, and the ID.4 GTX confirmed it.

Designed in-house, the ID.4 GTX showed a muscular stance with a high body shape, specific for an SUV. At the front, it showed a similar fascia as the ID4, with additional daytime running lights in the front’s side scoops. The ascending beltline continued to the raked C-pillar. Alongside the newly designed bumpers included 3D LED taillights with brake lights that formed an X-sign with the horizontal light strip across the tailgate. The body color was more dominant than on regular ID.4 models. The roof and rear spoiler were black, while the roof frame was high-gloss anthracite.

Inside, the vehicle’s dashboard relied mostly on two displays: one as an instrument cluster and the other for the infotainment system. The minimalist design trend followed the dashboard’s look, with flat and clean surfaces. The upper section of the dashboard and leatherette inserts in the doors came as a dark shade of blue.

Volkswagen installed a dual-motor system for the ID.4 GTX, one for each axle. Their total output was 299 hp, and thanks to its intelligent all-wheel-drive system, it could climb a 32.5% ramp effortlessly. 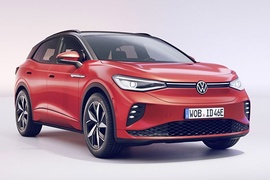