Based on the 7th generation of the regular Polo, the new Polo GTI was a comfortable and refined hot hatch.
While Polo never made it as far as the flagship Golf did, the new GTI drew immediate attention. And it also drove like a Golf, sharing its MQB chassis.

For starters, the GTI version could easily be recognised with the specific exterior design that featured red accents, especially at the front. The front radiator grille had a red stripe in the middle and with the optional LED headlights, the red winglets added to the aggressive design of the small car.

At the rear, the GTI version featured a black painted honeycomb structure, dual chrome tailpipes and the GTI lettering on the trunk lid.

Inside, VW installed only well-grained and sout to the touch materials, while the overall design was comfortable and sporty. To further point out the GTI character, bold red stitching was added.

The super comfortable body-hugging seats looked expensive and were available with both leather and cloth upholstery.

As standard, every GTI was fitted with a central 6.5-inch touchscreen infotainment system with standard Android Auto and Apple CarPlay.

Driven by a 2.0-liter turbocharged engine that produced 210 hp and 258 pound-feet of torque. Performance could be increase to 220 hp with the Performance package. 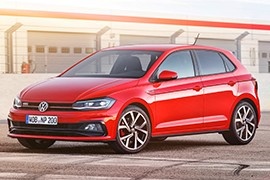