With a lot of experience under its belt regarding performance vehicles, Volkswagen introduced the most potent version of its Golf-based Tiguan model, the R.
Along with the 2020 facelifted version, Volkswagen introduced a new model in the stable: the wild Tiguan R. A 320 hp compact SUV that was able to run among the best hot-hatches on the road and still be able to cope with some mild off-road situations.

On the outside, the broad black grille on the front bumper accompanied the same color grille. The new styling of the headlights resembled those installed on the Golf VIII. On the sides, the silver caps on the door-mirrors with LED turn-signals were specific for the Tiguan R. At the rear, the “R” lettering was installed in the middle of the tailgate, under the VW badge. In order to open the trunk, a hands-free system was fitted as standard. The roof-spoiler on top of the tailgate emphasized the sporty character of the car. Last but not least, the quad-exhaust system was specifically designed for the Tiguan R.

Inside, the designers installed top features never seen before on a Tiguan. The steering wheel featured illuminated touch islands and sliders. A new touch-module was installed for the climate control unit and for the heated front seats. A set of Type C USB ports were placed on the center stack. The Tiguan R was fitted as standard with an 8” screen for the Volkswagen Digital Cockpit.

Power came from a turbocharged direct-injection engine that offered 320 hp. The 2.0-liter engine was paired as standard to an 8-speed automatic transmission that sends the power in all four corners via a torque-vectoring system. 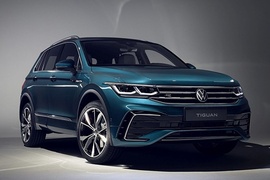