Like a clockwork mechanism, Volkswagen introduced the revised version of the T-Roc four years after its initial launch in 2017.
With its mathematical precision, the German carmaker upgraded the Golf-based T-Roc in the autumn of 2021 and brought new features and amenities for the subcompact crossover. While some upgrades were subtle, others were more in your face.

The car’s exterior design went through a mild refresh that brought more lighting effects and a restyled front area. Also, there were new color options and an R-Line package that added a dynamic appearance to the car. At the front, a daytime running light strip crossed from inside the headlights onto the honeycomb-styled grille. In addition, another set of vertical LED lights adorned the side scoops from the lower side of the bumper. The main headlights were available with an option for MATRIX-LED. The redesigned LED taillights with cascading turn-signals at the back, while the lower bumper sported fake exhaust tips.

Inside, the carmaker enhanced the dashboard’s look. As standard, depending on the market, the driver got an 8” instrument cluster with an option for a 10.25” unit named Digital Cockpit Pro. In addition, Volkswagen placed a standard 8” or 9.2” touch-screen for the infotainment system atop the center stack, depending on the trim level and options. Another improvement was for the door cards, which received standard fabric materials.

Under the hood, the carmaker offered a choice of diesel and gasoline engines ranging between 110 PS (108 hp) and 190 PS (187 hp) paired with either manual or seven-speed (dual-clutch) automatic transmissions. In base models, the T-Roc only sent the power to the front wheels, while the all-wheel drive systems were available on the more powerful versions. 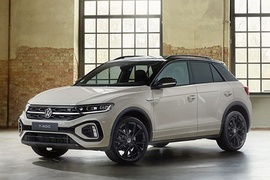