In 1989, at the Geneva Motor Show, the German manufacturer unveiled the Zender Fact 4 concept.
Two years later, with the intention of producing and selling the model, the Fact 4 was presented at the IAA in Frankfurt.

The Fact 4 Spider unveiled in 1991 had a modified chassis and a different engine, compared to the concept car. The monocoque carbon fiber chassis was replaced by a tubular steel chassis and the twin-turbocharged V8 engine transformed into a naturally aspirated Audi 3.6-liter V8 engine with 250 hp.

The model was the result of a 2 year hard work to produce a sport vehicle at lower costs than its predecessor, the Fact 4 Biturbo. The body was still made of carbon fiber and aramid, using the sandwich technology, the reason why the car was extremely light, yet resistant. A Spider’s door only weighed 2.6 kilograms.

Gunter Zillner was the one to design the car and managed to create an aerodynamic perfection. The angles were reduced as much as possible and the Fact 4’s big spoiler was removed. Focusing on weight reduction, the side and rear windows were made of Plexiglass.

The car’s weight was 1230 kilograms, which was intelligently distributed as follows: 45% on the front axle and 55% on the rear. The Spider reached 100 kph (62 mph) in 5.8 seconds and had a top speed of 250 kph. Despite the efforts of the German producer, the Zender Fact 4 Spider was not produced in series and remained at prototype stage. 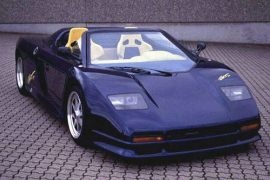