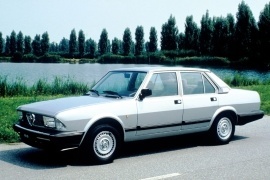 Introduced by Alfa Romeo in 1979, the Alfa 6 model received a major facelift in 1983.
The new car featured square headlights (as compared to the old rounded ones) and newly-designed bumper & grille. In terms of interior design, the 1983 Alfa 6 featured about the same components as its previous version and was fitted with a brand new Bosch L-Jetronic fuel injection system (nevertheless, it failed to improve engine’s power rating from 158 PS). Two new engines were now available for the Alfa 6: 2.0L V6 and the 2.5 Turbodiesel.The Alfa Romeo Alfa 6 was discontinued in 1986. 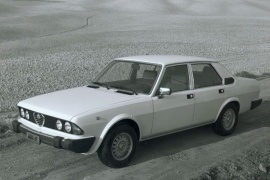 While the Alfa Romeo 6’s design work was done prior to the Alfetta’s, the fuel crisis delayed its debut.
However, the sedan was pretty much a bigger and wider Alfetta, sharing many of its components, including the doors.

The not-so-stylish exterior design didn’t attract many Italian buyers and other countries were selling it half the price to avoid getting stuck with them.

Alfa tried to better the sedan’s image. At that time, among the Italy’s favorite sports was kidnapping, thus Alfa presented the Romeo 6 as a vehicle that didn’t attract much attention.

The Alfa Romeo 6 was driven by a 2.5-liter V6 engine that generated 156 hp mated with a ZF automatic transmission. It was considered Italy’s fastest 4-door production vehicle for a while.

Features available with the Alfa Romeo 6 included power steering, power windows, central locking, a standard limited slip differential and a shock sensor that would stop fuel supply in case of a crash.

Besides the 2.0-liter version that was reasonably popular, the sales were low. However, Alfa decided to launch the second generation in 1983. By 1986, the production was ceased.

A total of 6589 units were built and most of them were used by the government’s officials.