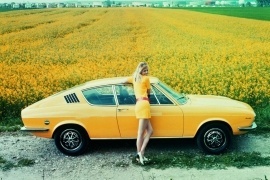 Audi dared more after it was successful with the 100 series and offered the 100 Coupe S model in 1970 as a fastback, two-door coupe.
When Volkswagen bought the Auto Union plant from Ingolstadt, it did it because it needed more production capacity for the Beetle, which was highly successful. They got the 80 model in the package, but VW didn’t take that too seriously. A group of engineers secretly developed a new vehicle, the 100, and when they showed it to the VW management, they loved it. It was a huge success and saved the Audi brand. Later on, in 1970, the same engineers made the fastback coupe version for it, named 100 Coupe S. While it wasn’t that successful as its four-door sibling, it was still a successful vehicle, which brought more brand awareness for the German brand.

The 100 Coupe S featured the same front fascia with double headlights as its four-door sibling and the big, four-ring badge on the grille. Its raked windshield and sloped roofline were new for Audi. Its designers installed an additional set of side windows behind the thin B-pillars and four vents on the C-pillars.

Inside, the car was very spacious, thanks in part to the front-engine and front-wheel-drive configuration. BMW and Mercedes-Benz provided more powerful cars at those times, but they had a massive transmission tunnel that crossed the cabin from front to back due to their classic drivetrain configuration. The 100 Coupe S’ dashboard featured wood trims and a center stack under it. The carmaker installed a four-dial layout on the instrument panel, which indicated the coolant temperature and fuel level apart from the speed and revs.

Under the hood, Audi installed a 1.9-liter, inline-four engine with a side-mounted radiator. Thus, the car’s front overhang was shorter, leading to the illusion of a rear-wheel-drive vehicle. 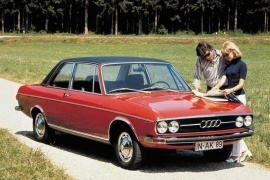 After Volkswagen decided to keep the Audi brand alive, the engineers from Ingolstadt worked on the 100 sedan range and designed a two-door version for it.
When Volkswagen acquired the Ingolstadt factory, it just needed more production capacity for the Beetle. But the Audi already had the Model 80 on the assembly lines, so VW principals didn’t rush but thought about axing the model and the brand. In complete secrecy, Audi’s engineers developed a new sedan based on the same platform as the 80: the 100. After they showed it to the new management, they received an ok for that. That’s how the story of the 100 and the A6 begun in the late ‘60s.

The Audi 100 appeared on the market in 1968 and, a year later, it came its first sibling: the 100 Coupe. It was more of a two-door sedan than a coupe, but the carmaker had something to show to the growing market. The car featured the same front fascia as the 100, with chromed trims and four round headlights. From its sides, though, the carmaker made longer doors and installed new side windows for the rear passengers.

Inside, the carmaker kept most of the 100 sedan’s interior, albeit it mounted tilt-forward front seats. Thanks to its front-wheel-drive architecture, it could provide plenty of room for the occupants since there was no transmission tunnel to cross the car from front to back.

When Audi introduced the model, it used the engine’s power as a nameplate. For those times, a 100 hp vehicle was considered quite powerful. Its standard transmission was a four-speed manual, while a three-speed automatic was offered later on as an option.