Spawning from the successful Audi A6 Allroad, the smaller A4 Allroad has failed to conquer as many customers as its bigger brother, but has managed to create a niche of its own.
The model’s second generation received a mid-cycle facelift in 2019, alongside the regular A4 Avant and A4 sedan. Most of the modifications revolve around an upgraded exterior design and a revamped engine lineup.

Just like its predecessors, the 2019 Audi A4 Allroad differs from the regular A4 Avant thanks to distinct front and rear bumpers, wider wheel arch trims and side sills in gray, along with silver underbody protection and raised roof rails and higher ground clearance. In fact, the ground clearance is 35 mm (1.4 in) higher thanks to larger wheels wheels and slightly raised suspension. This doesn’t exactly make it an SUV but the model is definitely better fit for unpaved roads in this configuration. Only a 2.0 TFSI engine with 245 horsepower is available at the start of production, paired with a seven-speed S Tronic transmission, with two diesel versions to follow. 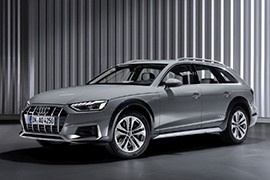