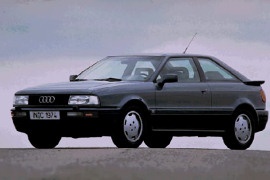 Audi introduced a facelifted version for the Coupe lineup in 1991, even though it was only three-year-old, but had to bring new engines under the hood.
By 1992, European carmakers were forced to produce Euro 1 engines. Gone were the days when the cars had no limits in their pollutants. In the U.S., the carmakers already had limits since the ’70s, but for the European carmakers, the struggle just began. Audi was not very concerned about that since it already complied with stricter Californian regulations. But it couldn’t afford to prove a low-powered car in Europe. Not when it had to fight against the BMW 3-Series Coupe in the premium segment.

The 1991 Audi Coupe shared its platform with the Audi 80 (B4), and its shapes were similar to its compact premium sedan sibling. With a refreshed front fascia that sported rounded corners over the headlights and clear corner mounted parking lights, the Coupe looked up to date with other cars on the market, especially with the BMW E36 coupe. Unlike the other German contender, the Coupe was actually a hatchback, with a liftgate at the back and a lip spoiler just beneath the rear window. Since it was the facelifted version of the B3, it was often named B4 even though its bodywork code didn’t change after 1991.

The Coupe featured bucket seats at the front and a folding bench in the rear, depending on the version. The center stack sported the audio system and the climate control buttons. As an option, Audi offered an air-conditioning unit for the Coupe on the base versions and standard for the more powerful ones.

Under the hood, Audi installed a wide engine choice, depending on the market. It offered only the two-liter engine in Italy and Greece since there were higher taxes for anything over 2.0-liter displacement. The 2.2-liter turbocharged version named S2, with an all-wheel-drive system was the top-spec model. 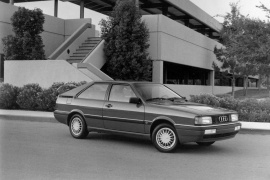 Audi introduced the Coupe lineup in 1980 and offered a sporty alternative front- or all-wheel-drive coupe for a market dominated by rear-wheel-drive sports-cars.
Also known in Audi’s internal coding system as the Audi 81, the Coupe shared its platform with the 80 lineup and received both front or all-wheel-drive systems. The German carmaker used this range to build the mighty Audi Sport Quattro rally-car that dominated the World Rally Championship at the beginning of the ’80s and marked the all-wheel-drive superiority on loose surfaces.

Escaped by the curved panels and waved shapes of the ’70s, Giugiaro imagined the Coupe with straight lines and angular shapes. At the front, depending on the version, the Coupe sported four rectangular headlights or two wider ones. A black plastic grille stood flat vertical above the wrapped-around plastic bumper and corner-mounted turn signals. Despite the car’s shape, its sloped rear window didn’t open with the trunk lid, which was wide but short and tall.

Inside, there was plenty of room for five adult passengers, although the middle one had to deal with the center tunnel. At the front, the sport bucket-seats featured adjustable height. Depending on the engine and trim level, the dashboard featured larger dials for the speedometer and tachometer and two small gauges for fuel level and coolant temperature. An additional set of three gauges installed on the center stack showed the oil pressure and temperature, plus the charging status.

Audi installed a choice of engines ranged between 1.6-liter and 2.2-liter. Depending on the engine version, the carmaker offered fuel-injected engines or carbureted. The standard transmission was a five-speed manual, while a three-speed automatic was on the options list. For specific versions, and only after 1983, Audi offered an all-wheel-drive system.