Audi introduced the second generation of the compact-size SUV Q5 in 2017, and three years later, it brought the facelifted version, enhanced for the Euro 6d standards.
The German car-maker introduced the Q5 in 2008 as a compact luxury cross-over vehicle. It was in the middle of the world economic crisis, and that affected its sales. The customers appreciated the product, and slowly but surely, its sales started to grow. By 2017 it was already obsolete despite the 2012 facelift, so it had to be replaced. Between 2017 and 2020, new rules and regulations regarding the emissions and safety features forced the car-company to introduce a new version. At the same time, the design team worked together with the engineering department and restyled the car.

The car’s front featured a new, octagonal, single-frame grille with vertical chromed bars for the Advance trim level and honeycomb pattern for the S-Line. The license plate was placed on the bottom of the new grille. On the lower side of the apron, the design team installed taller side intakes in front of the wheels and placed the fog lights there. In the back, Audi offered OLED taillights as an option, while the standard was the regular LEDs.

Inside, the dashboard offered a new look with a trim inlay that separated the lower part to the upper one. The new MMI (Multi-Media Interface) featured a free-standing look touch-screen on the center stack’s top, and the rotary knob control used on its predecessor was deleted. Since there was more room on the center console, the gear selector knob was wider.

The technical department had to work extra hours to bring a new engine lineup. At the time of its launch, there was only a 2.0-liter turbodiesel engine available. 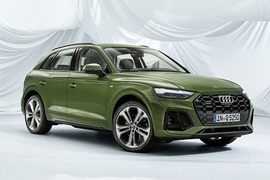