In 2013, Audi launched the RS Q3, the first Q model to ever wear quattro’s go-fast badge.
It was not that well received, many criticizing it for the single exhaust pipe and diluted 2.5-liter turbo engine when compared to the RS3 and TT-RS. For 2015, Audi is back in the game with an updated model that ticks all the right boxes. A new 2.5-liter engine has been installed, one that does a much better job at delivering its power. The output is up from 310 hp and 420 Nm to 340 hp and 450 hp. A 7-speed S tronic double clutch gearbox still takes care of power delivery. Audi also installed a new hydraulic multiplate clutch (5th generation), which has also been refined for even faster gear changes. As a result, 0 to 100 km/h times drop from 5.5 to just 4.8 seconds, on par with the Mercedes GLA 45 AMG. The base price in Germany for the new top model is 56,600 euros. LED headlights, among other features, are standard.
For 2016, the Audi RS Q3 received an update, boasting more power and getting an Euro 6 emission classification. Small visual changes have been made to exterior and interior trimmings as well. 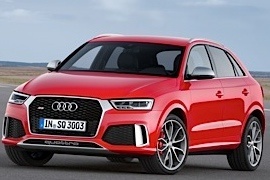