In April 2016, Audi introduced the refreshed A3 lineup, and, along with the rest of the range, the German carmaker upgraded the S3 as well.
Since the beginning, it was one of the hottest hot-hatches on the market, and it provided an all-wheel-drive system. Over time, while the A3 range evolved, the S3 was constantly upgraded. The third generation of the A3 was refreshed in 2016 and, two decades after the first generation.

The S3 was offered in four body versions: hatchback with 3- or 5-doors, cabriolet, and sedan. A new front fascia was introduced, with a taller single-frame grille between the standard full-LED headlights. There were a pair of air-scoops to cool the brakes on the sides, and those were not only for show. The S3 showed the S-logo from the brake-calipers through the 18” light-alloy wheels with a unique design. A discrete roof-spoiler was on top of the tailgate (for the hatchback versions), and four, not so discrete, exhausts were shown under the bumper.

Inside, the S3 featured S-logos on the flat-bottom steering wheel, the door-sills, seats, and gearstick. Two bucket seats in the front offered good support on the corners. Depending on the options, the instrument cluster could feature the Audi Virtual Cockpit digital display. The MMI (Multi Media Interface) infotainment unit was fitted as standard.

Despite not having complaints about the 300 hp engine offered on its predecessor, the 2016 S3 offered 10 hp more. It was mated as standard with a 6-speed manual for the 3-door hatchback. In selected markets, such as the U.K., the 5-door version and the sedan came equipped with a 7-speed automatic (dual-clutch) S-Tronic gearbox. 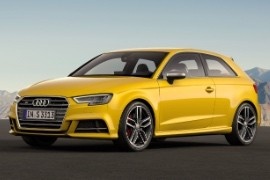