Changing from soft-top to hard-top just a few years ago seemed to be a good idea, but in 2020 BMW did the exact opposite by switching from hard-top to soft-top for the 4-Series convertible.
BMW had a long history with open-top vehicles, even before WWII. The German car-maker always mastered the mix between the driving pleasure in a sports car and the open-top experience with minimal or no compromise in performances.

The first element that stood apart on the car’s image was the grille. It was massive and extended down into the apron, eliminating the other grille from the bumper. The side-pods hosted the fog lights and fake air-intakes for the brake discs. The LED headlights were fitted as standard while the laser lights were on the options list. The 4-Series convertible featured a clean look, with curved surfaces, unaltered by sculptured doors from the sides. The designers installed a pair of fake vents behind the rear wheels and a couple of exhaust tips in the back.

The interior was suitable for four adults due to the big, 2.85m (112.2”) wheelbase. Since the soft-top took less room than the hard-top, the rear bench could have been moved almost over the rear axle. Due to the new system, the trunk offered 80 liters (2.82 cu-ft) more room than its predecessor. But that was not all. The soft-top could have been opened or closed at speeds of up to 50 kph (31 mph) in 18 seconds.

The 4-Series convertible was fitted with a choice of four engines ranged from 184 hp up to 374 hp with either rear- or all-wheel-drive. All versions were fitted with 8-speed automatic transmission. To comply better into the Euro 6d requirements, a mild-hybrid diesel version was added to the range. 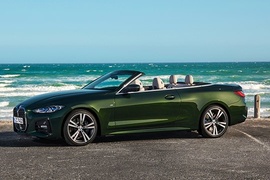