The popular vehicle caught the eyes of the buyers due to its luxurious look, both the exterior and the interior design, along with the sportiness and comfort offered over the years.
The Bavarian company managed to sell over 600,000 units of the 5 Series, both sedan and touring versions.

The 5-Series won several awards such as the Executive Car of the Year, Connected Car Award (winner) and others, proving that its success lasted for over 28 years and still counting.

The new 2020 model brought a refined look, with a bigger kidney grille in contrast with slimmer headlights. The car’s proportions were not changed, however, it gained a few inches in length. A longer wheelbase version was also available, only for the Chinese market though.

The 5-Series was already known for its low coefficient drag, thus keeping the tradition, the new 2020 G30 had a Cd of 0.23 (sedan) and 0.26 for the touring, both achieved with great attention paid to the exterior lines and the air flap control system for the radiator.

While the 5-series used to be the bigger version of the 3-series, the 2020 generation brought it closer to the 7-series, by offering pretty much the same optional features, as well as the standard ones.

Available with the most wagons, the buyers could open the rear windscreen while leaving the trunk closed, a feature that eased the handling of light items.

The G30 could be ordered with the BMW Laserlight, a system that was introduced in 2019 only for the top-of-the-line 5-series modules. The system became available for all of the existing trim levels.

The 2020 release also brought the M Sport Package with a new design, including a new front apron, enlarged air intakes, kidney grille bars with aluminum matt faces and others. 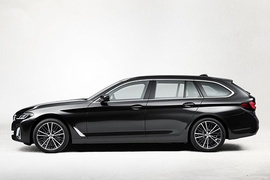