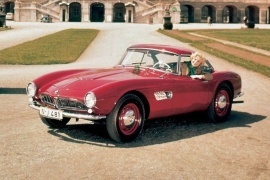 One year after launching the new 507 TS Roadster, BMW extended its model range with the introduction of a new coupe version.
Designed by Albrecht Goertz, the 507 TS was based on the BMW 503 but featured a shorter chassis and an entirely aluminium-hand-made bodywork. The coupe variant, like the convertible, was fitted with an aluminium alloy-made 3.2L V8 unit delivering up to 160 hp and a 4-speed manual transmission. Its on-road performance were also impressive, with the coupe reaching 0-60 mph in around 9 seconds and topping 140 mph. Both coupe and convertible versions of the 507 TS were discontinued in 1959 due to financial difficulties. 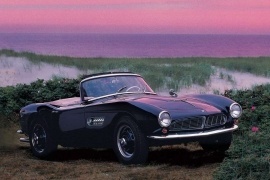 The BMW 507 was created to improve the German car brand into the American Show-Biz arena.
It was launched in 1955 and it made it into the Elvis Presley garage.

In 1955 BMW was still struggling with old engines, vehicles on old chassis and a tiny car named Isetta. It was far from reaching its glorious past before WWII. Their idea was to improve the general perception for the brand and for that, it offered a special roadster: the 507.

The main importer of the BMW brand in the U.S. was Max Hoffman, the same person that convinced Mercedes-Benz to produce the 300 SL Gullwing. He knew that the market was open for expensive flamboyant roadsters. The 507 was supposed to fill the gap and BMW hoped that they could sell 1000 units per year. The chassis was a shortened version from the BMW 501 convertible and the V8 engine was specially produced for the 507.

With its long hood and side vents behind the wheel arches, the 507 was received as a breakthrough model, with high performances and could fill the need for fast roadsters on the U.S. market. Along the 507, the same designer created the 503, which was a GT-coupe car.

The V8 engine was mated to a 4-speed manual gearbox and everything on the car was specially designed for the 507. Due to those reasons, the final price of the vehicle was twice as big as projected. In 1953, the Corvette was already on the market at a fraction of the price of the 507. The result was a huge loss for the BMW brand who had to pull the plug after only 252 vehicles were built between 1955 and 1960.