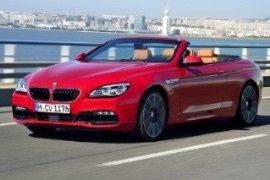 Although not clearly visible, for 2015, the BMW 6 Series Convertible got refreshed.
Design wise, the kidney grille now comes with 9 bars instead of 10, there’s a new bumper with bigger air vents, restyled 20-inch rims, aerodynamically-improved wing mirrors and reshaped windows surroundings adorn the sides of the car, while the rear end comes fitted with a new bumper. Standard interior features and optionals list has also been revised.

Mechanically, the luxury convertible remains the same, but improvements have been made to the engines to consume a bit less fuel. 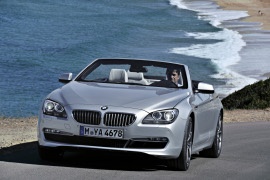 After presenting the Concept 6 Series at the 2010 Paris Auto Show in September, BMW revealed the 3rd generation 6 Series Convertible (F12) in mid-November.
The car’s first major appearance in front of the international media was at the 2011 North American International Auto Show in Detroit. Lane Change Warning System, Lane Departure Warning System, Speed Limit Info, BMW Night Vision with pedestrian recognition, rear-view camera, Surround View and the BMW Parking Assistant are only a few features present on the new 6 Series Convertible, together with the debut of BMW’s all-new Head-Up Display (a first for the 6 Series). 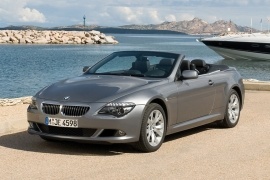 BMW slightly revised its 6 Series for the 2008 model and introduced it at the 2007 IAA Frankfurt Auto Show.
Both the coupe and convertible variants were introduced with redesigned front and rear bumpers (featuring larger air intakes to improve engine cooling), revised head and tail lights and redeveloped side sills. The 6 Series 630i version benefited from a considerable increase of power (14 hp), while car’s interior trimmings featured slight and barely-recognizable modifications. Some interesting new components fitted into the 6 Series facelift included active cruise control and adaptive headlamps. 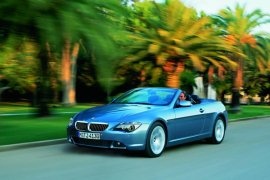 The second generation of the 6 Series had received the much wanted convertible version.
The original, 1977 model, didn’t have that and most of the potential buyers just asked “why”. But in 2004, they quit complaining.

The E64 6 Series convertible was the first of its kind in the BMW lineup. A soft-top Granturismo vehicle that could roll nice and quiet despite its big engine, or fast and loud with the throttle planted. Its design was a mix of likes and dislikes, mostly due to the design of the headlights. The front bumper featured a shark-like lower grille split in three and the small kidney grille on the upper part. On the side, the long beltline was nice looking, starting from the front wheel arches but suddenly dropped from the middle of the rear fenders.

Inside, tons of features made the driver happy, from the i-Drive to the head-up display offered as an option. The big, comfortable seats up front were electrically adjustable in all the possible ways. It had two seats in the back, but with limited legroom. But if nobody was seated there, a wind-stopper could have been placed over the rear seats. It was a very effective device, especially if the side windows were up.

Under the hood, there were three engine choices: an inline 6 and two V8. All were available with manual or automatic transmission, but only RWD.