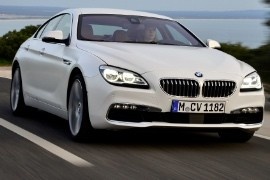 In 2015, BMW introduced a life-cycle impulse for the 6 Series Gran Coupe to comply with new emission regulations and brought a refreshed look.
With the 6 Series Gran Coupe, BMW offered a proper answer for the Mercedes-Benz CLS. It introduced the four-door version in 2012, a year after its two-door stablemate. Three years later, the carmaker refreshed the entire lineup introducing new technologies and a more aggressive design.

At the front, the car featured new LED fog lamps under the full LED headlights. Its grille sported nine vertical slats on each side of the kidney grille, one less than on the non-facelifted version. A side-to-side “mouth” found its place on the lower side of the bumper. The flared wheel arches and the rear horizontal lines from the back of the car created the image of a wider car. That effect was enhanced by a chrome strip in the bumper trim. For the six-cylinder versions, the rear apron featured larger surrounds for the tailpipes.

Inside, the 2015 model featured new piano-black trims on the center console, surrounding the climate control buttons. Its high-bolstered front bucket seats were covered in Dakota leather with an option for Nappa. In the back, the carmaker kept the two-seat layout with a very tall transmission tunnel. Instead of a middle passenger seat, BMW installed a folding armrest.

Under the hood, BMW installed Euro 6c-compliant engines with either six or eight cylinders. A 313 hp turbo-diesel was specially built for European customers, while the U.S. buyers got only the twin-turbocharged 3.0-liter or the twin-turbocharged V-8. All versions were available with rear or all-wheel-drive and featured a standard eight-speed automatic gearbox. 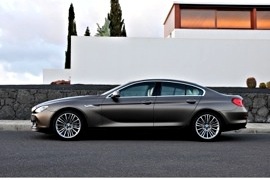 On the brinks of the world economic crisis in 2007, BMW showed the CS concept-car, a study that revealed a four-door coupe.
But it had to wait for another five years to be released as a production vehicle named 6 Series Gran Coupe.

What it was, it was a BMW 6 Series with four doors. Underneath the body, there was the BMW 5-Series platform, but the Gran Coupe was longer, wider and lower than that. After Mercedes-Benz CLS and the Audi A7, the Gran Coupe filled the German premium offer in this new segment of luxury four-door coupes.

From front and rear, it was just a 6 Series with the same angry eyes and the LED signature in the headlamps. The wide air-scoop in the front bumper helped to cool the engine, while the “BMW-kidney” grille was wider but not tall. The sleek lines evoked speed and performance. And that what the car offered.

Inside, the luxurious interior featured bolstered seats, high-quality materials and an easy to read instrument cluster. In addition to that, a head-up display was offered as an option but, unlike other brands, the system projected the information on the windshield. The big, bulky, transmission tunnel separated the driver from its side passenger. BMW said that the car was a 4+1 people vehicle. It meant that four people could seat in comfort, but that “+1” should ride on the extended center console that went all the way to the rear seats.

Under the hood, there were few engine options fed with diesel or gasoline. An all-wheel-drive transmission was available as an option, while the base versions had rear-wheel-drive only.