After a few years of innovations and experiments in electric mobility, BMW made another step and introduced the full-electric crossover iX3 in July 2020.
The BMW i3 made part of its fans angry and the other ones happy. But the car sold well, and it allowed the German car-maker to understand the way people are using an electric vehicle. Meanwhile, the i3 provided valuable data for further developments of the electric mobility solution. And the first result of that experience was named iX3.

Its look might resemble the BMW X3, and there was no coincidence since the well-known SUV was used as a base product for the electric vehicle. While the kidney-grille was more of a kidney-panel, since it was closed, the look was similar. There were only a few clues left from the profile, like the charging port door on the front fender. In the back, where the exhausts were placed on the X3, there were two blue trims.

Inside, the instrument cluster featured a TFT display. The infotainment system was placed on top of the center stack on the dashboard in a floating design trend. The gear-selector was similar to the one found in an X3. By moving the selector from “D” to “B,” the car used the regenerative braking system to slow the vehicle, charging the batteries. Bucket seats were installed for the front occupants, and a two-passengers profiled rear bench was installed, but there was room for up to five people inside.

The drivetrain used an electric motor to power the rear wheels only. The axle was specially developed and adapted for the existing X3 platform. All of the components were developed in-house by BMW, including the motor and the batteries. The 286 hp motor produced exactly the same output as the former BMW X3 3.0 SD. 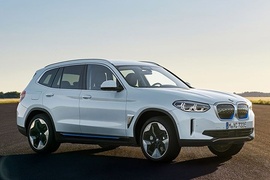