BMW introduced the third body version of the M4 in late spring of 2021 with the addition of an open-top vehicle, completing the lineup.
When the German carmaker decided to change the M3 nameplate from the coupe, its fans were upset. Yet, it didn’t change its mind and produced the M4 as a coupe and Gran Coupe. While the former was already known on the market, the latter wast a four-door fastback fake coupe with a sloped rear liftgate.

In the new clothing, the topless M4 kept the same core values from the Coupe at the front, with the twin kidney-grilles and the aggressive-looking LED headlights. Its panel soft-top could have disappeared in 18 seconds, at speeds up to 50 kph (31 mph). The new retractable roof featured a new technology that made it lighter than a hard-top and better insulated than a three-layer fabric one. BMW installed a new trunk lid at the back, which was flatter than on the M4 Coupe.

Inside, there were more standard features for the four-seat convertible. Gone were the analog dials; hence the M4 convertible received a standard digital TFT instrument panel. BMW installed a 10.1” infotainment display above the center vents. The carbon fiber and aluminum trims were also standard, along with the sport bucket seats. Behind the cabin, the carmaker managed to fit a 300 liters (10.6 cu-ft) trunk with the roof down and 385 liters (13.6 cu-ft) with the top up.

The drivetrain was similar to the one fitted on the M4 Coupe, with only one difference: it was all-wheel-drive without the possibility to disengage the front wheels, as in the hard-top version. 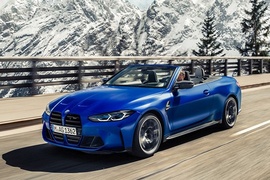