BMW has a long history of making roadsters all the way back to its roots.
This is why it continued to make roadsters for driving pleasure. In 2018, the new generation of the Z4 was launched. Unlike the previous generation, which was available with a retractable hard-top, the new generation is available only as a roadster. Those who want a coupe will have to buy the 2018 Toyota Supra, which is almost identical but it has a fixed top.

Unlike the Supra, the Z4 is available in three engine versions. The Z4 is available with a two liters engine either naturally aspirated or turbocharged, and the top version 3.0-liter turbocharged. The output range is between 197 and 340 hp. For the base model, the sDrive 2.0i, the transmission is a 6-speed manual gearbox. For all the others, an 8-speed Steptronic automatic gearbox is fitted as standard.

Compared to the older version, it is bigger on the outside but has a shorter wheelbase. Now it features a 2.47 meters (97.2”) long distance between the axles, which makes the car more agile in the corners. It also has a 50:50 weight distribution.

From the technology point of view, the Z4 has some interesting features. Apart from the latest digital instrument cluster and infotainment, the Z4 can be opened and locked via smartphone. Using the NFC (Near Field Communication) technology, the smartphone turns into a key. So, if you forgot your keys at home, just be sure you have the phone charged. 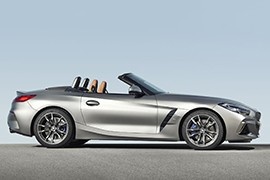