Cadillac took a luxury sedan and turned it into a hot-rod when it dropped the Corvette engine under its hood, but it did more than that.
For a long time, the American luxury sedans were just comfortable. Apart from their fuel-injection system, they had the same technology as a WWII car. It was no wonder that the Germans were all over them on the streets and in the sales charts. Then, Cadillac said, “that’s it!” and forgot its regular customers from the AARP and turned its attention towards the younger generations. Then, the GM management realized that a powerful Cadillac is a better Cadillac. So, the performance Caddies were born.

They say not to judge a book by its cover, but the CT5-Blackwing says a lot about itself. Its headlights looked like it was from the Marvel world. Its broad mesh-grille was complemented by a lower one in the apron while the two vertical LED strips resembled two daggers from a silent killer. The design team added more spice in the back, including a carbon-fiber trunk-spoiler and, under the bumper, a multi-slat diffuser that hid four squared exhausts.

Inside, the carmaker tried to offer a sportier look for its customers. In a way, it did it by installing carbon-fiber trims on the door panels and the center console, but not on the dashboard. The instrument cluster featured a TFT display where the tachometer took center stage.

The CT5-Blackwing was the most potent street vehicle ever built by the American carmaker. Unlike its main rivals, its 6.2-liter supercharged engine was paired as standard to a 6-speed manual gearbox while a 10-speed automatic was on the options list. 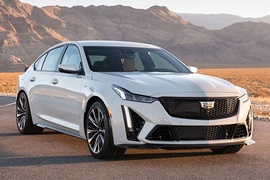