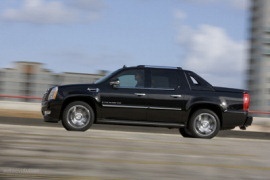 When more and more customers started to ask for more features on their pickup-trucks, Cadillac saw an opportunity to offer them a luxury light-utility vehicle.
While in the ’90s, the association of a premium brand with a pickup-truck seemed inappropriate, in the 2000s, that idea started to take shape. Cadillac made its move and introduced the EXT version for the second generation of the Escalade. In 2006, along with introducing the third generation of the big SUV, the American premium carmaker brought back the EXT version: a four-door pickup-truck based on the same chassis as the Chevrolet Silverado.

The third generation of the Escalade brought a new styling for the front fascia with narrower headlights, and thus it made room for a broader, pined-out grille. There was one distinct difference between the premium SUV and the EXT version behind the C-pillar. While the SUV continued with a trunk or the third row of seats, the EXT featured a bed. After all, someone could fit a tent in that covered bed, an ATV, or two off-road motorcycles.

Cadillac offered side steps, which reduced the ground clearance but enhanced comfort when stepping inside. As usual for that lineup, the American carmaker spoiled the customer with a mixture of the leather-wrapped cabin, wood-trims, and chrome accents. A wide center console with a refrigerated storage area inside big enough for a six-pack found its place between the cooled and heated front seats. The rear seats were suitable for three adults, and there was limited storage behind the bench.

The EXT was available with one powertrain option, a 6.2-liter V8 that offered 409 hp. The engine was paired to a six-speed automatic transmission and standard all-wheel-drive. 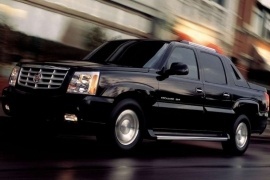 Cadillac made a luxurious version for the Chevrolet Avalanche, and since it built it on the same chassis as the Escalade, it named it Escalade EXT.
While it was hard to understand why Cadillac built a half-pickup luxury car, GM considered it a great addition to the brand. Worth mentioning that in 1970 Cadillac made a pickup named Mirage and sold only 204 of them. But still, since most of the Escalade EXT shared its parts with other GM products, it was easier to make it. Selling it was another problem. For the first generation of the EXT, things went better than for Mirage. The carmaker managed to sell almost 50,000 units between 2001 and 2007, which was still less than 10% of the regular Escalade.

The EXT shared its front fascia with the regular Escalade. Cadillac’s new design language featured angular lines, and its squared headlights with corner-mounted turn signals confirmed it. Its broad grille with vertical and horizontal slats sported the brand’s badge in the middle. On the sides, the carmaker offered side-steps as an option. The big difference compared with the regular Escalade was in the back. After the rear doors, the carmaker cut the vehicle and installed a pickup-like bed with 10” (25 cm) thick side walls where it placed storage compartments. In the back, the low-hinged tailgate allowed more effortless loading and unloading.

Inside, the front part of the cabin featured the same flat dashboard with a hockey-stick-sized gear selector behind the steering wheel and more dials and gauges than any other Cadillac (except the regular Escalade). In the back, the folding bench and removable rear panel allowed the owner to extend the bed inside the cabin. It formed a 2.5 meter (97.2”) loading platform, with the tailgate closed.

Under the hood, the carmaker installed a Cadillac-only 6.0-liter Vortec V-8 engine, which provided 350 hp and sent its power to all corners via a four-speed automatic gearbox with a tow-load selector.