No doubt, the Camaro is an icon of the American automotive industry.
Its name is connected to the pony-car wars and The Transformers franchise. But the need for a bigger market made GM to chop the Camaro roof of and make it a convertible. And, in 2019, this open-top went through a major facelift in order to be more appealing to the younger generation. That is why they gave it new LED-dual headlights and a reshaped hood.

Inside, there are enough features to stand-up to the new age of technology, with an infotainment unit that supports Apple CarPlay and Android Auto connectivity. And, due to its big wheelbase, it is a real four-seater, just with two doors.

The 2019 modifications brought the 10-speed automatic transmission with paddle shifters from the ZL1 version to the SS. Also, the 2.0-liter turbo engine was installed on a tailored chassis, derived from the V6 engine variants, which included a limited-slip differential and a six-speed manual transmission fitted as standard. The 275 hp and the 400 (295 lb-ft) of torque helped the convertible to move better in traffic, more fuel-efficient but still fast.

The 5.2 seconds needed for the 0 to 60 mph sprint (0-96 kph) place the convertible Camaro L1E in the hot hatch territory, but with rear-wheel-drive and a soft-top, which should make it better than a hot hatch. 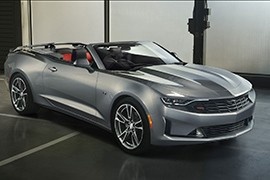