If there would be a contest for the best pizza-delivery car, the Spark could take the crown thanks to its low purchase price combined with great fuel efficiency.
GM kept the old platform from Daewoo and used it over and over again for the Spark. Chevrolet introduced the fourth generation of the small vehicle in 2015 and, three years later, it received a mid-cycle refresh that brought new interior features and improved exterior styling.

GM design department didn’t have to go too far in improving the Spark. The grille was changed with a more prominent “mouth” in the lower bumper area and featured a chromed surrounding for both. An LED daytime running light system was enclosed in the headlights. In the rear, the taillights remained virtually unchanged.

Inside, Chevrolet introduced a standard infotainment system that supported Apple CarPlay and Android Auto, plus access to MyChevrolet mobile app. Its 7” touch-screen sat on top of the center stack. GM granted the U.S. customers a limited trial for the OnStar system. The dashboard didn’t look like a budget-car one. Its instrument cluster featured a center-mounted speedometer with a tachometer on the left and an LCD on the right. At the far left, a small digital line showed the fuel level. If the steering wheel buttons were something special in the ’90s, the 2018 Spark had them fitted as standard.

In the U.S. It is offered with a 1.4-liter gasoline engine, with a claimed fuel consumption of 3.9 l/100 km (40 mpg.). It came standard with a 5-speed manual transmission, and a CVT was available as an option. 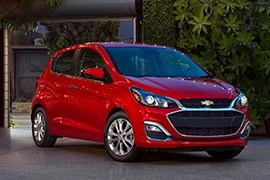