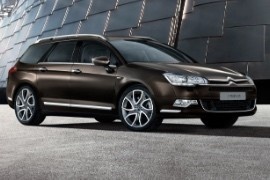 Citroen had a long history in building station-wagons long before its competitors started to draw their first ones.
Its experience was proved once again with the 2010 C5 Tourer.

The marvelous Citroen DS was offered as a station-wagon since the late ’50s, and the French carmaker continued to build such practical cars ever since. The C5 Estate (or Break) benefited from all that experience. The French brand introduced the second generation of that model in 2007 and, four years later, it enhanced it with a facelifted model.

There was a new L-shaped LED strip for the daytime running lights on top of the front bumper at the front. The headlights were reshaped accordingly, featuring a straight lower line instead of the older version, with a slight interior step. The reversing lights from the taillights received clear lenses.

Inside, there were just two buttons added, for the Citroen eTouch emergency system, in selected countries. That comprised a sim-card and a GPS module accessible via an SOS button for emergencies or a “double-chevron” button for other requests. The best part of the C5 Tourer was the rear adaptive suspension, available as an option. It could raise or lower the back of the car to ease-up loading and unloading. The same system was used to keep the car at the same level, regardless of the large trunk’s added load.

For the 2011 model, the French carmaker offered the C5 Estate with a choice of gasoline and diesel engines, all turbocharged. The car was available with a 5- or 6-speed manual transmission, while a 6-speed automatic was available on selected versions. 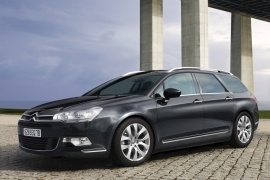 Citroen introduced the all-new C5 Tourer at the 2008 Geneva Motor Show.
The new model featured a rear window similar to the C6 and the same Citroen-styled front fascia. Aimed for the large family car sector, the C5 Tourer rivals cars like the Renault Laguna, Ford Mondeo, Opel Vectra and Volkswagen Passat. It comes with a wide variety of petrol and diesel engines, with the top-of-the-line being the two V6 units (both petrol and diesel). This model is the natural progression of the former Estate version (also known as the station wagon) from the first generation C5. 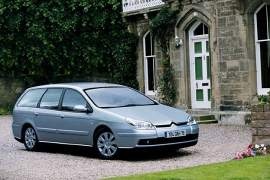 The French manufacturer introduced the first facelift for the C4 Estate (or Station Wagon) in 2004.
The improved model featured the same Hydractive suspension - which enabled the driver to control ride height depending on road conditions - but received several changes in terms of front and rear fascias, while also being equipped with directional headlamps. Also, the new 2004 version of the C5 Estate was longer by 3.5 inches as compared to the base model. The facelifted C5 Estate was discontinued in mid-2008 (May), while replaced by the second generation C5 Estate. 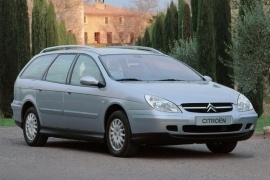 Citroen launched the new C5 model in 2001, aiming to replace the Xantia on the medium-to-large family car sector.
The all-new model was available with two body configurations: the 5-door liftback and the station wagon (or Estate). What was new about this car was the revised hydropneumatic suspension - officially designated the Hydractive 3 - replacing the mechanical height correctors with electronic sensors. The new system enabled the driver to control the ride height depending on the road and, therefore, improve comfort and fuel efficiency. This model received its first facelift in 2004.