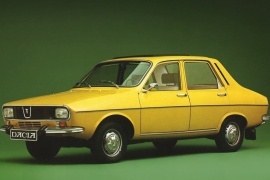 The first Dacia 1300 left the assembly line on the 23rd of August 1969, just one year after the Renault 12 (on which it was based) started production.
The two cars were basically the same minus the different badges and trim lines, making the Dacia 1300 one of the most modern mainstream automobiles in Europe at the end of the ‘70’s, even though its overall design was pretty basic.

First units made at the Mioveni plant in Romania were CKDs (Complete Knock Downs) imported from Renault in France and workers only had to assemble them like a puzzle. After the plant got the right tools and started to actually make the 1300s from the ground up, quality started to drop and many of the cars were affected by corrosion and bad fit and finish. Story says some models had bizarre panel gaps right after they rolled out of the factory. And these problems continued to affect future generations until the model went out.

Export models, for South America and the Communist Block, were better made, the problems above mainly affecting units for the local Romanian market. By the way, buyers there had to place an order for their car and wait for more than 6 months to receive it, since the export order was more important to fulfill.

The Dacia 1300 continued to be made without major modifications until 1979, when the facelift “1310” model was released.