Daihatsu targeted mostly the customers who needed a cheap, reliable car that could take them from A to B without stress and with an impressive fuel-efficiency.
Daihatsu was a big carmaker and shared a few parts or models either with Toyota or Subaru. The Cuore (heart in Italian) lineup was established in 1980, and by 2007 it already reached its seventh generation.

From the design point of view, it is hard to understand why such a good car received such bad treatment from the design department. Even if it looked better than its predecessor, it looked average for the European’s taste. The bumper was tall, and the small cuts in the upper and lower side for the grille didn’t make such a good impression. With its short front side and tall stance, it looked closer to a kei-car vehicle than to a supermini European vehicle. Despite its short length, the Cuore featured four doors. In the back, next to the tailgate, Daihatsu installed vertical taillights to be protected in the parking lot.

The interior was simple, with a grey dashboard from top to bottom and from left to right. On the center stack, at the bottom, there were the three rotary knobs for the HVAC unit. A stereo-CD with AM/FM occupied the upper side of the center stack. Despite the intelligent layout, the materials used looked cheap but reliable.

Due to the high seating position, the Cuore offered good legroom even for the rear seat passengers. There was a trick with the bench, which could slide back and forth to improve the rear knee room or to increase the luggage compartment.

Daihatsu offered only one engine option for the Cuore. It was the three cylinders unit. It was good for 150 kph (93 mph). 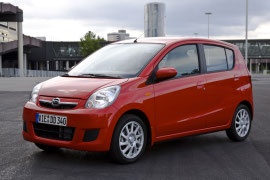