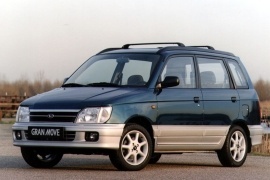 Daihatsu introduced a more extended version of its Move minivan in 1996 as the Pyzar in their home market and then exported it renamed Gran Move.
Three years after the car’s introduction, Daihatsu introduced a facelift for the Gran Move in 1999. While the vehicle didn’t get more comfortable seats or higher-spec trim levels, it lowered the emission according to the Euro 3 standards, which came in force starting with 2000. At the same time, the carmaker’s design team worked a little on the vehicle’s exterior.

Daihatsu changed the corner-mounted turn signals at the front, replacing the yellow lenses with clear ones. In addition, the Gran Move’s front fascia featured a new grille with a chromed horizontal slat instead of a mesh-grille sported by the 1997 model year. At the back, the carmaker changed the taillights as well. Its facelifted version wore two clear horizontal lines for the reversing lights and the turn signals instead of the previously used small squared clear areas for backing up and yellow for changing directions.

Inside, the carmaker added an airbag for the driver on a new, three-spoke steering wheel. Besides, Daihatsu installed padded door cards on the base trim level, and for the full-spec version, a wood veneer adorned the center stack. Fortunately for those who enjoyed nights in nature, the car still featured the flat-folding seats that could convert into beds.

Under the hood, the carmaker installed a new, 1.6-liter gasoline engine. It provided only one horsepower more than its 1.5-liter predecessor but brought some torque to the table, resulting in better fuel efficiency on the highway. 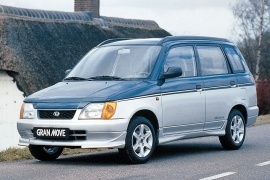 Daihatsu introduced the Gran Move in 1996 on the small MPV market to offer more interior room for its customers and excellent fuel-efficiency.
The Gran Move was built on the same platform as the Charade. Its front-wheel-drive architecture allowed the Japanese carmaker to create a taller cabin with a higher seating position. Thus, it solved the problem with the interior space and all-around visibility.

While it wasn’t the best-looking vehicle in the small-MPV segment, the Gran Move was one of the best-engineered ones. The design team was inspired by the Japanese kei-car segment, where the vertical panels and flat surfaces brought more efficiency, but the smaller windows were not the best idea they had.

Inside, the higher front seats and bench allowed better legroom for the rear seat passengers. There was room for two in the back, or three if they were very close friends. Daihatsu had to make a concession to the trunk space, but at least it offered a 50/50 split-folding bench. The dashboard featured a closed glove-compartment and an open storage area in front of the passenger. For the driver, the carmaker installed a small instrument cluster with three dials. Its speedometer took center stage while the tachometer claimed the right side. The third dial featured the coolant-temperature and fuel-level gauges.

Daihatsu installed only one engine option under the hood; a 1.5-liter four-cylinder engine paired to a standard five-speed manual gearbox.