The 2015 Charger was not a car that could blend in the crowd, but it was a car that could be a smooth family sedan or a pursuit Police cruiser.
The Charger name was brought back in 2005 and its retro-design look was very appreciated by the customers, who didn’t care if the original Charger was a 2-door sedan and the new model was a 4-door vehicle. It was the sixth generation of an almost forgotten name in the Dodge stable. In 2011 the model was changed and, in 2014, it received a major facelift.

For the exterior, the 2015 model received more rounded headlights and in the lower part of the apron, the designers installed LED daytime running lights. The front grille was different, depending on the engine. To suit all the needs, the customers could choose between 14 different alloy wheels.

Inside, the makeover brought a new instrument cluster with a 7” TFT display for the on-board computer. The infotainment Uconnect system was available with up to an 8.4” touch-screen on the center stack. The sport-bucket seats were available for most of the engine range. 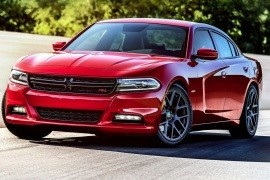