Citroen refreshed the DS3 model in 2016, and, along with the facelift, it introduced its premium brand named DS Automobiles.
When Citroen introduced the DS model in the ’50s, it was the most successful car in history, with orders piling up at a considerable rate. Only the Tesla Model 3 exceeded the same number in the first 24 hours since its launch. Just remember that there was no Internet nor live streaming in the ’50s. Fast forward six decades, and the French carmaker considered that it was time to establish the DS Automobile as a distinct brand, and it started with this: the DS3.

The refreshed Citroen DS3 lost its Citroen badge but gained a new one. There were no “double-chevron” logos on the car—only the DS one, which took center stage on the front grille and the tailgate. To make the small-segment vehicle looks premium, it added a chromed trim around the grille. Its innovative LED-Xenon headlights were unique on the market when the car was introduced, and not only on the small segment. The car’s profile remained the same, with a raked-forward B-pillar and a darkened C-pillar that created the illusion of a wrapped-around rear glass area.

Inside, DS Automobiles featured higher quality materials than in any regular Citroen. The DS3 sported a carbon-fiber look for the dashboard, leather-wrapped steering wheel, and handbrake. Its bucket seats were made more for comfort but with high bolstering areas. In the back, there was hardly room for three people, and even two were cramped. The rear seatback didn’t fold flat, but it added some volume to the trunk.

Under the hood, the DS3 offered a choice of gasoline, and turbo-diesel engines ranged between 82 hp and 160 hp. 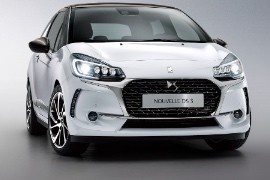