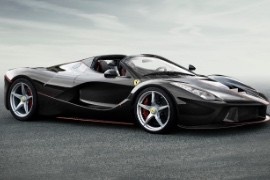 An open top version of the exquisite LaFerrari was revealed late in 2016 to offer select clients the same thrills from the hardtop model with the added pleasure of driving with the wind in the hair.
The LaFerrari Aperta, as it is named, is available in limited numbers with both a carbon-fiber hard top and a soft top. Despite the hole in the roof, Ferrari says the model boasts the same specifications and characteristics as the standard LaFerrari. In fact, the drag coefficient is said to stay the same even if you drive top down, which means you can hit the same top speed.

The engineers’ challenge was even higher: they had to ensure the same torsional rigidity. They achieved this by adding a carbon-fiber “flying bridge”.

Engineers also focused to develop a chassis and aerodynamics that can result in a quieter cockpit even when the top is down. They added a wind-stopper system, which drastically reduced the wind noise and improves aerodynamics. As a result, the occupants can carry a conversation without having a sore throat the next day.

The roadster’s powertrain is the same as the one from the LaFerrari, and uses hybrid technology. It couples the massive V12, 6,3 liter-engine with an electric motor. The total output is 963 HP. Also, it borrows the HY-KERS system, developed by Ferrari on the F1 track in its winning single-seaters.