Ever since the first generation of the 500, Fiat offered a top-cabriolet version for the little city car, and it generously offered it with a rag-top even on the sportiest versions.
Fiat and Abarth are linked together like M from BMW and AMG from Mercedes-Benz. There was no surprise that the Italian specialist tuned the 500 series into a stylish pocket-rocket that could roam the streets with its 160 hp turbocharged engine.

Abarth worked for the Italian carmaker and tuned the 1.4-liter engine to produce more power, but it didn’t forget to restyle the car’s exterior. Unlike the rest of the Fiat 500 range, it featured a lower apron at the front with a big mesh-grille and two fog-lights. On the outer sides, the tuner prepared two vents for the disc-brakes. The modifications went on and prepared a set of aerodynamic side-sills. To complete the sporty image, Abarth installed a roof-spoiler between the C-pillars. As with any 500 top-cabriolet, the 500C Abarth Essesse featured a power-retractable fabric roof folded down behind the rear seats, together with that spoiler.

Inside, Abarth changed the dashboard and mounted a boost-gauge next to the instrument cluster. The red metallic panel resembled the shape of the original Fiat 500 from the ’50s. Instead of a gear-lever, the carmaker installed four buttons on the center stack to control the gearbox. If the driver desired to change them manually, he or she could use the steering wheel’s paddle shifters.

Under the hood, Fiat dropped a 1.4-liter turbocharged engine that produced, with the Abarth help, a whopping 160 hp, which were sent to the front wheels via a five-speed automatic transmission. 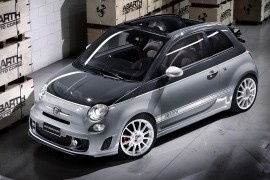