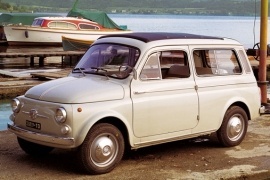 Fiat 500 was an excellent car for its times, but the customers complained about the interior space.
And then, the carmaker introduced the Giardiniera version.

Designed to offer a roomier interior, the new version was a step above the regular 500 D range. Despite its small engine and exterior size, it was considered adequate for a family with taller members. Moreover, the car could have been used as a small utility vehicle—sort of an LCV.

Fiat introduced the 500 Nuova (New) in 1957 and, three years later, it upgraded it to the D-model. It looked almost identical, but it featured a solid roof. For those who preferred an open-top, more spacious vehicle, the Italian carmaker offered a canvas-top version Giradiniera. At the front, it featured round, orange, turn-signals mounted on the front fenders, instead of the teardrop-shaped ones from the previous 500 Nuova model. The Giardiniera version was fitted with rear-hinged front doors. The carmaker installed a side-opened rear door in the back, which allowed access to a larger storage area behind the rear seats and above the engine compartment.

Inside, there was the same minimalist design concept as on the 500 Nuova. It featured cloth seats in the front and a bench for two in the back. The metallic dash panel sported a speedometer and a few warning lights for fuel, charging, and oil pressure. Due to its longer cabin, the Giardiniera version was considerably more comfortable and spacious.

Fiat installed the same two-cylinder engine as the one from the regular 500 D. It was paired to a standard four-speed manual gearbox. Unlike its sibling, it featured a stiffer suspension to cope better with heavier loads in the back.