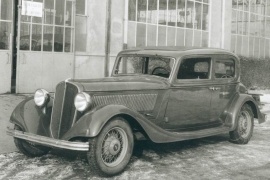 Fiat produced around 1000 units of the extensive limousine.
The car was built for higher-class, and it was the larger version of the Fiat Ardita, but with an inline-six engine under the hood.

The tall and long vehicle was offered in a few body versions. Independent coachbuilders built some of them. Inside, there was room for up to seven passengers in the limousine version designed by Fiat. A tall engine compartment that started on top of the front wheels and the long wheel arches created an elegant look for the car. In the five-passenger version, the greenhouse ended above the rear axle while the limousine had a D-pillar and an extra row of side windows.

The interior was well garnished with leather and wood to offer maximum comfort and elegance for those times. Thanks to its big wheelbase, it provided good comfort for its occupants and easy access due to the rear-hinged rear doors.

Unlike the Fiat Ardita, powered by a four-cylinder engine, the 527 (also known as the Ardita 2500) featured a six-pot gasoline engine with downdraught carburetor, a synchromesh four-speed gearbox, and 17” wheels either wire or solid disc. It featured hydraulic brakes, which were prone to brake often. An unusual option for those times was the cylinder head’s choice, either cast-iron or light-alloy, which made a five hp difference in engine’s output from 55 hp to 60 hp.