The Fiat 850 was already successful on the market as a 3-door hatchback and as a coupe.
The addition of the open-top version was nothing but enhanced pleasure for its driver.

Fiat was already known for its small-sized vehicles, with its very good fuel-efficiency engines. Models such as 500 and 600 were already crossing the European continent and managed to find parking spots where no other cars could fit. The 850 was a larger vehicle, so four adults could fit in. But there also was an increasing demand for open-top vehicles. By using the same platform, Fiat managed to introduce the 850 Spider in 1965, simultaneously as the 850 Coupe, at the Geneva Motor Show.

Fiat hired Bertone studios to design the open-top version of the 850, and he started from the coupe version. It narrowed the front end and succeeded in building one of the most classical Italian roadsters, apart from the Alfa Romeo Spider. Its raked windshield and the completely hidden roof behind the seats left a clean image of the roadster. Due to the rear engine architecture and the small wheelbase, the car was able to fit only two passengers aboard.

Inside, Fiat asked Bertone to carry-over most of the Coupe parts to cut costs. A five-dial instrument cluster was fit into a flat dash panel split into two separate areas, so it gave the driver a race-car feeling. A floor-mounted gear-stick and an ashtray placed in the middle of the dash were the car’s main visible features.

Fiat installed the 0.9-liter engine from the Coupe and paired it to a 4-speed manual gearbox under the hood. The 49 hp engine was upgraded in 1968 and gained another three ponies. 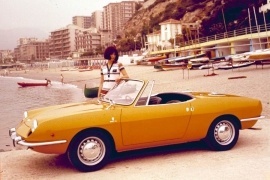