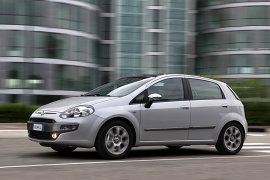 The Punto Evo was launched by Fiat with the occasion of the 2009 Frankfurt IAA and although the name has changed, the car is actually a facelift version of the Grande Punto, which it will replace for the small car segment.
The car has received minor exterior changes, but features a completely retouched interior. With the Punto Evo, Fiat premiered a new engine valvetrain system, called the MultiAir. This system can be fitted to both petrol and diesel engines and among optimizing fuel efficiency and throttle response, its main advantage is it drastically reduces NOx emissions. 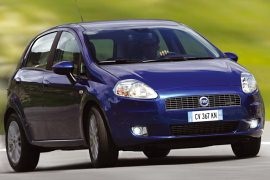 The Fiat Punto was a great success for the Italian brand, but it needed a successor.
The new model, introduced in 2005, was named Grande Punto.

Fiat was known for being a good carmaker for the small segment. Over the years, it showed its skills with vehicles such as the 600, 500, Tipo, Ritmo, and others. It was the bigger classes that gave them headaches, such as the Argenta or Croma. But they never failed in the supermini or in the small segment.

Gone were the straight cuts and the angular lines from the Punto. The Grande Punto came with a rounded bodywork, with Maserati inspired headlights, and an ascending beltline. The flared wheel-arches evoked sportiness and a muscular presence, even though in most of the engine versions, that wasn’t true. It took the idea from the Punto to install the taillights vertically on the C-pillars. Last but not least, Giugiaro and its Italdesign Studio signed the design. The Grande Punto was offered in 3- and 5-door version.

The interior was much better than on the older generation. The dashboard was mounted higher than before. It could offer better protection in the event of a crash. The drivers very appreciated a new instrument cluster with easier to read dials. There was a good room in the front but limited on the back seats due to the short wheelbase. It was a common problem for the small segment.

For the engine bay, the Italian engineers prepared a wide choice of options. The Grande Punto was available with two or four cylinders units. That’s right: two cylinders for the 0.9-liter TwinAir unit. The power output available for the Grande Punto ranged between 65 hp and 120 hp.