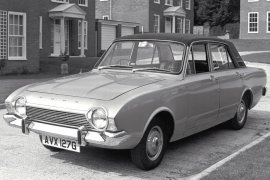 Ford U.K. introduced the Consul Corsair, or better known only as of the Corsair, at the 1963 London Motor Show as a four-door or station-wagon vehicle.

The American carmaker needed a car to increase the profit from the Cortina lineup and that led to the project “Buccaneer”. Its engineers took the platform of the light compact vehicle and stretched it to make it a four-door sedan and a station wagon. To promote the vehicle, Ford took a standard vehicle and ran a 43 endurance race covering 29,991 miles (48,265 km), which was more than the Earth’s circumference. The Corsair was on and everybody talked about it, especially since it was advertised by no other than the F1 Champion Jim Clark.

In an effort to enhance the car’s aerodynamic, the design team imagined a horizontal V-shape for the front end, with the round headlights cut inside the front fascia. Its wide, metallic mesh-grille was a new trend and the final result was successful.

Inside, there were some parts shared with the Cortina model, but nobody bothered about that. It was the car that offered good comfort for four adults, with enough doors for them and great visibility. Ford didn’t forget about practicality and provided a big trunk for it.

Under the hood, the American carmaker installed a few engine choices, starting with a 1.5-liter inline-four and ending with two V-4 engines. All versions were paired to a four-speed manual with the gear-lever installed next to the steering column.