The F150 was the most sold nameplate in the world since its introduction in 1948.
In 2020, Ford introduced the 14th generation of the well-known pickup.

The world pandemic situation from 2020 forced the carmaker to launch one of its most essential products in an online event, even though it usually did major events with customers, buyers, media, and dealers. But the car raised the standards of what a vehicle of its type could be.

The exterior look might resemble the older generation, but it was completely new, with military-grade aluminum body panels. A new grille with wide slats was installed. On the wheel-arches, the designers installed plastic trims to protect the bodywork from mud and stones. In the back, the tailgate worked as a workbench fitted with anchor points for loads. Inside the bed, on the side, the engineers installed outlets for power tools. The electricity came from either a 150 kWh battery pack or a gas-powered generator.

The interior could have been fitted with features like in a business class cabin, with full-reclining front seats. Another interesting part was the tilting gear-selector that could have been folded and make room for the optional, arm-rest integrated, folding working desk. The infotainment system was Apple CarPlay and Android Auto wireless compatible. The car featured over-the-air updates. The instrument cluster was a configurable digital display.

Under the hood, Ford offered a wide choice of engines. It offered gasoline, diesel, and a hybrid version. The latter featured a 47 hp electric motor integrated into the automatic transmission. 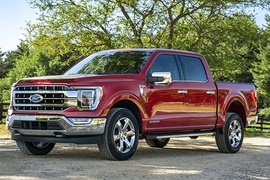