Ford seems like it locked a hard off-road team and asked them to do a professional all-terrain pickup truck smart enough to be driven by newbies on expert trails.
Most of the off-road fans are customizing their trucks. Nobody wants to tackle a challenging trail with a showroom condition pickup-truck. Changing the tires is just for starters, but soon follows the suspension, skid plates, transmission, and so on. Ford engineers asked themselves if they cannot do that right from the start and do it better. So they took an F150 and upgraded it, and named it F150 Tremor.

The exterior looked mostly like a regular F150, but it was broader and taller. On the bodywork, there were some orange decals on the grille and the sides. As for why was the new beast taller and wider, that’s a different story.

The interior was slightly reworked when compared to a regular loaded with options F150 Crew Cab. Active Orange punctuated an interior packed with Tremor detailing, including unique seat trim with superior stitching, materials, and finishes for the instrument panel, center console, and doors.

But the real upgrades were under the military-grade aluminum bodywork. The engineers installed a new suspension with higher ground clearance, with one inch at the front and 1.5” in the rear. There was one damper on the front side and two in the back. A set of bigger, 33” General Grabber all-terrain tires increased the ground clearance with an additional 1” all around. The transmission was reworked and featured a locking rear differential. A front locker was on the options list beside the standard LSD system. A complete set of skid plates protected the pickup-truck underbody as for towing capacity, which remained unchanged to 10.900 pounds (4944 kg). 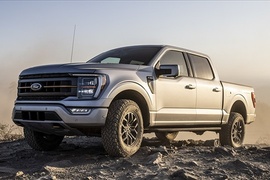