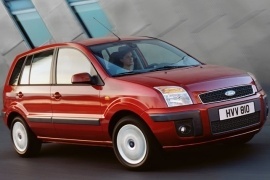 Ford introduced the European Fusion range in 2002 and, just three years later, it came with an upgrade for its crossover vehicle

While most carmakers started to introduce station wagon shapes on their small-segment vehicles, Ford took another path and made the Fusion, which was a longer wheelbase Fiesta.
It also increased the ground clearance making it better suited for unpaved roads or parking over curves in cities. It resulted in a better car than the Fiesta while still remained the same fuel-efficient vehicle.

For the mid-life cycle refresh, Ford adopted new headlights with orange turn-signals on top of the swept-back headlights, while the non-facelifted version featured clear lenses over yellow bulbs. The front bumper received a new design and sported vertical side scoops that flanked the lower grille. Along with the updated version, Ford dropped the rubber strips from the bodywork. In the rear, the 2005 Fusion featured new taillights with taller reversing lights.

Ford made the most significant changes inside the car, where it introduced a completely new dashboard. It added a small storage area above the glove-box on the passenger side, ideal for a mobile phone. For the redesigned center-stack, it included a new CD-radio that supported Bluetooth connectivity. Inside the rounded instrument cluster, which resembled the one existing on the Mondeo MKII, Ford installed a new instrument panel. Its fuel and coolant-temperature gauges were moved upward, and all dials received chromed rings around them.

Ford offered the Fusion with the same engine range, all upgraded to Euro4 emission rules. They were paired to a five-speed manual, while the automatic version was not available. 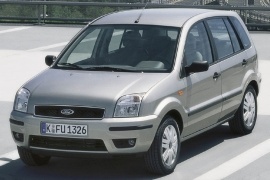 Unlike its American sibling with the same name, the European version was based on the supermini Ford Fiesta, with a longer wheelbase and a higher ground clearance.
While other European car-makers already offered station-wagon vehicles in the small segment, Ford didn’t but made a different vehicle based on the same platform as the Fiesta: the Fusion. It was a fusion between a small-segment hatchback and a station-wagon and lifted the suspension.

The car’s front resembled the Fiesta image with the squared and swept over the hood headlights, but with a different grille design. An additional grille on the lower part of the bumper enhanced the car’s image. The car featured rounded edges to sweeten the overall boxy look. In the back, the taillights were mounted vertically on the rear side of the D-pillars. A different suspension made the car taller, with higher ground clearance. It was, somehow, the beginning of the crossover in the European crossover family.

The interior resembled much of the Fiesta’s cockpit, but a two-tone scheme for the dashboard was typical for the Fusion. Thanks to its bigger wheelbase, the rear passenger legroom was bigger, but there was hardly enough hip- or shoulder room for three adults since the car was narrow.

Ford installed some engines from the Fiesta and the Focus range, such as the 1.4-liter and the 1.6-liter gasoline units. The diesel versions were those developed together with Peugeot-Citroen, with the same displacement as those with spark-plugs. The standard transmission for the entire range was a 5-speed manual.