Ford introduced a vital upgrade for the Mustang in 1968.
It was the year when the carmaker took its gloves off and started to punch the other muscle-car producers.

In 1967, the muscle-car era was at its height, and cars like the Pontiac GTO or Dodge Charger started to get more attention on the drag-strips. Ford was losing at its game, and surely it didn’t want that. But the carmaker had a few aces on its sleeves and introduced an updated version for the 1967 and 1968 model year. That included larger engines, some exterior modifications, and interior improvements. It was also the car that starred in the famous chase from Bullit against a Dodge Charger.

On the outside, the carmaker installed side-scoops and chrome side ornaments. At the front, the famous Mustang badge was not supported by horizontal slats. It was just bolted onto the grille. In the rear, there were concave taillights that made the car looks sportier than the original version.

Inside, the carmaker had to do some modifications according to the new safety rules, including the seatbelts. There was a new, two-spoke steering wheel with an energy-absorption steering column. Along with these improvements, Ford started to offer new interior colors for the upholstery.

Under the hood, Ford went all the way and installed a big-block V8 engine, which put down over 400 hp for the top version. On a car of that weight, and with an improved suspension, the Mustang regained its place on the racetracks. 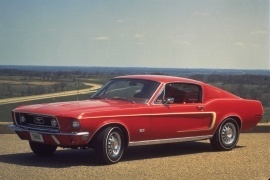