A revised version of the Ford Ranger was released in 2015.
It wasn’t a completely new model, but a facelift that improved the comfort and the performance of the most sold pickup in Europe.

Since it was introduced in 2011, the third generation of the Ford Ranger grew on the market and succeeded to gain more than one-fifth of the market. The experience gained by Ford in building and selling pickup trucks in the U.S. paid off in Europe too.

With the facelift, the 2015 Ranger Regular cab offered a new front design. The headlights were smaller and placed upper, to protect them from small scratches and hits by the bushes or in parking lots. A chromed grille was adopted for the upper trim levels. It was noticed that European customers started to use the Ranger as a lifestyle truck, for outdoor sports, off-road trips and less for work.

Inside, the base versions were poorly equipped and prepared for being used as workhorses on the construction sites. For the upper trim levels and for the top of the range Wildtrak version the interior featured an advanced infotainment system, leather seats, and climate control, plus more USB ports for the connected lifestyle.

Under the hood, the Ranger Regular cab was offered with one engine choice: a 2.2-liter that provided 160 hp. The standard transmission was a 6-speed manual, and Ford offered it with a rear or a 4x4 version with a transfer case and high and low gears. 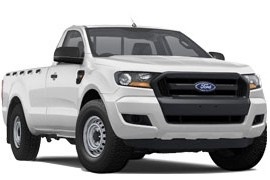