The Ford Transit is long established name in Europe.
Its roots are going back to 1953, when the first generation appeared based on the Ford Taunus platform, but it wasn’t until 1965 when the Transit name was used as a brand model, and not a version. It was a good strategy that worked for four generation. Now, it looks like the blue-oval carmaker wants to divide the successful name Transit into a range of different vehicles. The Transit Custom is a smaller version of the big Transit, which became available as a light utility vehicle of up to 5 metric tons, with lot of body variations. The Transit Connect though, it is smaller and it is one of the best vans in its segment.

The Transit Custom received a mid-cycle revision. The front look, the interior and the engine lineup was refreshed. On the front fascia, there are new headlights, new hexagonal grille and new bumper. The exterior design is part of the Ford’s lineup unitary look, amarked by the hexagonal grille shape on all of its range, from the small Fiesta and up to the Transit Van.

Under the hood, there are new engines. In the U.S., there was and still is available the 3.5-liter EcoBoost twin turbo, which offers 310 hp. ]A softer version of the same engine, without turbochargers. is now offered along with another new unit: the 2.0-liter TDCI EcoBlue that is shared with the Ford Ranger. It also gets a 10-speed automatic transmission. For the first time, the Transit Custom can be fitted with an all-wheel-drive system. 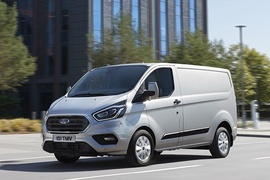