When GM and Isuzu joined forces to create vehicles together, they received something needed from the other partner, and Holden was one of the biggest winners.
With its high expertise in building light utility vehicles, the American team designed and produced the chassis for the Chevrolet Colorado, which GM also used on other vehicles built the American carmaker under different names, including the Hummer H3 SUV. On the other hand, Isuzu was the biggest diesel-engine builder in the world and put its 2.5-liter and 3.0-liter turbo-diesel units on the table. As a result, GM benefited from that arrangement and sold a re-badged Isuzu D-Max on the Australian market under the Holden Rodeo nameplate.

Even if the car looked like the design team was the less-favored part in the project, it showed a rugged style, fit for the light pickup market. Its vertical headlights made room for a wider grille, needed mostly for the gasoline-powered versions. In its Double Cab form, the Rodeo offered a cabin with four doors fit for five adults.

Inside, the materials used were not of the highest quality, but they were built to last. Its hard-plastic dashboard and soft padding on the door panels offered an adequate compromise for the vehicle’s destination. The instrument cluster was carried over from Isuzu, with a large speedometer in the middle, flanked by a tachometer on the left and the fuel and temperature gauges on the right.

Unlike Isuzu, who offered the car mostly with diesel engines, and Chevrolet, who sold the Colorado with gasoline versions, Holden benefited from both versions. Power ranged between a 78 hp diesel unit and a 200 hp V-6 gasoline powerplant. 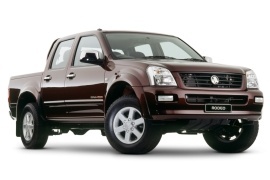