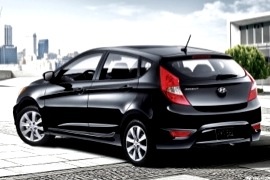 Heated side mirrors, remote keyless entry and air conditioning are now standard on all 2013 Accent trims. Accent SE’s side mirrors have been upgraded with turn signal indicators for an extra level of safety. Shoppers also will find an optional power sunroof on the Accent SE trim.

Accent has been well-received by shoppers. In fact, through the month of May, total Accent sales were up 51% over the same period in 2011. Retail (non-fleet) Accent sales were up an impressive 139% due to a 66.2% reduction in fleet mix. Automotive media and industry experts have also taken notice of Accent’s product success, awarding it various coveted awards and accolades since its reveal in April 2011. Along with two designations from WardsAuto, Accent was the highest rated subcompact sedan by a leading enthusiast magazine, above Chevrolet Sonic, Honda Fit and Toyota Yaris. 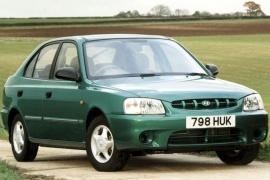 While the first generation was a bland, rounded car, the second generation featured a grille that looked like a mouth with teeth. The angular headlights and sharp lines made the car look more aggressive. It was available in two body versions with three and five doors hatchback. The latter was the most commonly seen on the streets, while the former made a good impression on the World Rally Championship and raised the brand’s image in the world.

The interior was heavily improved over its predecessor with better materials and a roomier cabin due to the longer wheelbase. It was not a big difference, but it was the difference between pressed knees and touching knees for the rear passengers. The split-folding rear seats was a standard feature. The Accent featured a standard AC-unit and power-windows at the front. For selected markets, such as the north side of Europe and Canada, the Accent was not just a cheap transportation device. It was a car.

For the powertrain, Hyundai installed a 1.3-liter gasoline engine for the base level and a 1.5-liter unit. The latter was available with an automatic transmission as well.